Jeremy Chen triumph in Parsippany!
2.18.2008
The oustanding victory of Jeremy Chen against a chess player 765 rating points above him, crowned the TAG student as the best upset in the third round of the U.S. Amateur Team East (Parsippany, NJ)
Conducting the white pieces, Jeremy with the rating of 996 in the USCF, defeated Joline James (1761) in 29 moves of the Fianchetto Variation of the King's Indian Defence.
The tournament was runned for three days from February 16 to 18, and reunites around two thousand chess players.
Jeremy acted as captain and first board of the TAG 2 team which included to Aravind Kumar, Nolan Fortin and Jay Yalamanchili.
Representing TAG were also the 'veterans' of the 2007 competition Kevin Zhang, Brandon Borden, George Didita and Daniel Selyutin.
Daniel individually completed five victories out of six games.
This is the first time that TAG in Princeton, the successful private chess program in Princeton area, attends with two teams in Parsippany.
"I feel very exhausted but the experience that our kids got, worth the effort" mentioned Elena Didita, coordinator of TAG for this event and other chess activities outside Princeton.

TAG 2 team from the left: Jay, Nolan, Aravind and Jeremy 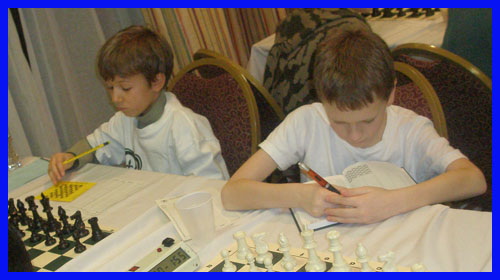 Veterans of 2007 Daniel and George. 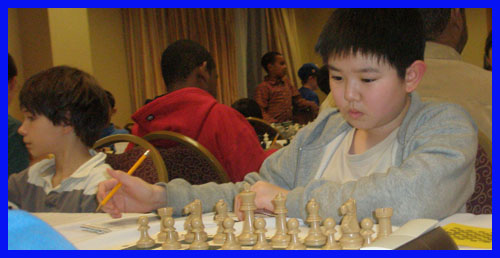 Writing a historical page in chess performances of New Jersey, three students of TAG, the successful private chess program in Princeton sponsored only for parents of children chessplayers, won each one first places in their divisions at the National Chess Scholastic 2007 in Houston TX.
Aravind Kumar, kindergarten from Orchard Hill Elementary, completed 6 out of seven points to get the crown of the country; Marko Vanselous, from Bear Tavern Elementary School,  playing under 800 rating was the best one among the second graders; and  Joel Pena from PDS, share also the first place with tie breaks in fourth graders.
TAG assisted to the competition with only six chess players all of them from diferent schools, including Rishi Rajendran, from Town Center Elementary School; Kevin Zhang from Cranbury School; and Jeremy Chen from Crossroads North Middle School.

Six determined members of Princeton TAG traveled to Houston, Texas in
December 2007 to compete in the National Scholastic K-12/Collegiate Championship.
All played their hardest, three returned as National Champions.

Aravind Kumar and Joel Anthony Pena were TAG’s frontrunners at the tournament. Kindergarten star Aravind Kumar, a student from Montgomery Township, won his grade level with 6 points. Kumar came out on top of a three way tie and was victorious over 48 kids. Joel Pena, a student from the Princeton Day School, was the 4th grade champion with 6.5 points. Pena finished 1st out of 169  4th graders.

Marko Van Selous, a 2nd grade student from Hopewell Township also won a National Title. With 4.5 points, Marko won a trophy for placing first in the 600-799 section for his grade. Marko placed 28 out of 119 2nd grade players.

The members of TAG had a thrilling experience at the Houston Grade Nationals. All enjoyed the competition. Playing seven games over a three day period against some of the best chess players in the country was an intense learning experience. We know that our son, Marko, though nervous and overwhelmed at times, learned strategies and skills he will take with him to other tournaments and life events. As his parents, we were pleased to see that Miguel prepared each student for the challenges they were to meet at Houston both months prior to the tournament and during the event. He was always there for the kids – to review games, to congratulate, to console, and to inspire. Miguel treats all his students as winners – and they are. 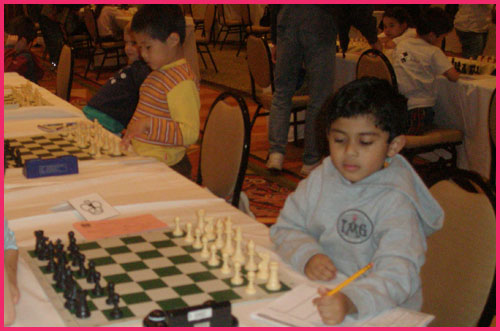 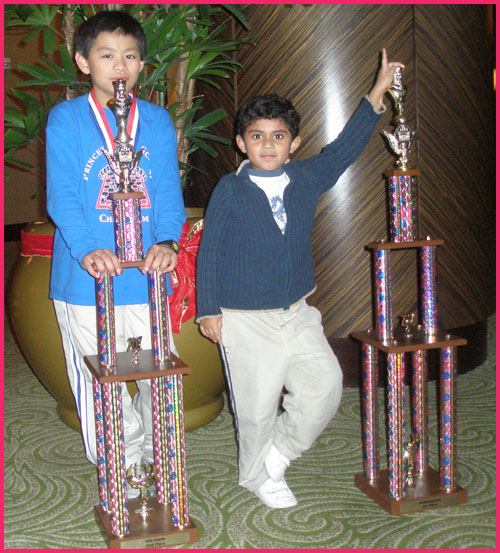 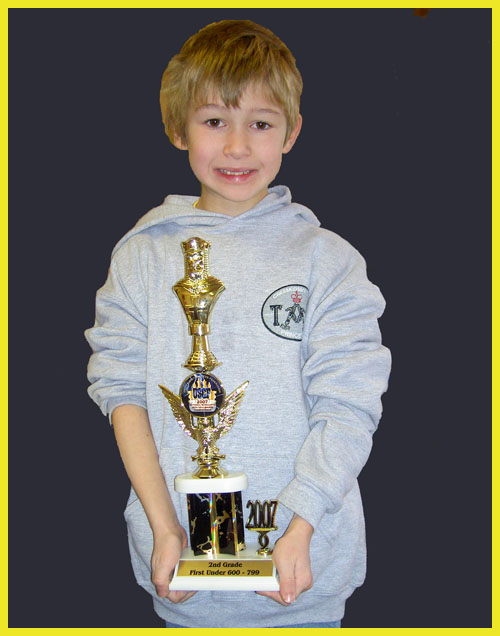 Marko Vanselous, USAChess Champion in 2nd. grade at the U-800 section 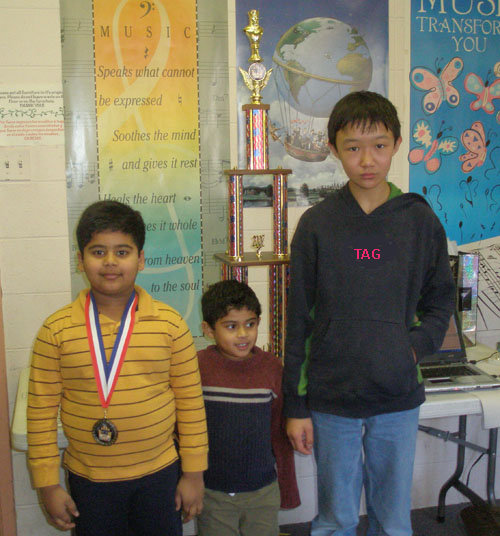 Back at the training area, Rishi Rajendran, Aravind Kumar and Jeremy Chen, just returning from Houston

Kevin Zheng and Marko Vanselous, already in preparation for the next one.

Brandon Borden, champion of New Jersey 2007!
09.01.2007
The 61st. version of the Open Championship of Chess in New Jersey was won by TAG student Brandon Borden with perfect score in five rounds of the under 1200 rating section.
This perfect performance demonstrate the power of his game as well as terrific improvement and justify his position  as the NUMBER ONE in his category in New Jersey State!

Brandon Borden first step with the masters
08.11.2007
At the famous Marshall Chess Club in New York, Princeton TAG student Brandon Borden had a discrete participation but show his potential by sustaining a wonderful game against the master Vladimir Polyakin. 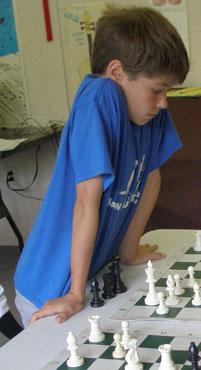 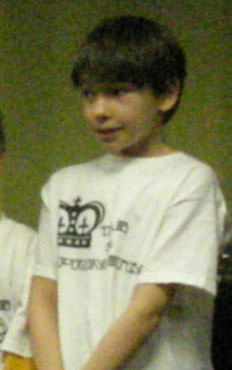 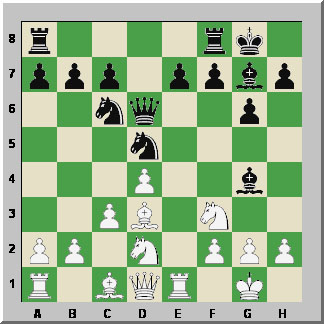 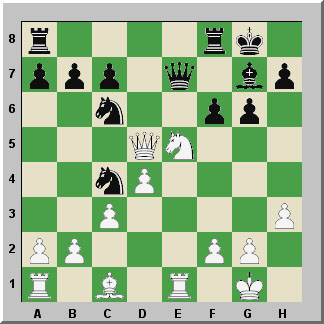 Susan Polgar was defeated by 11 years old Pavel Temkin!
03.17.2007
Even when the situation occurred in a simul game, the young fifth grader of Princeton Charter School introduced a novelty with his sixth move against the former World Champion! 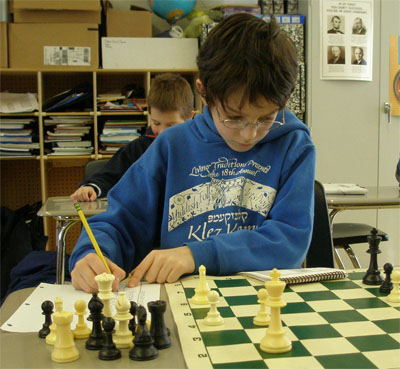 
Here is the game: 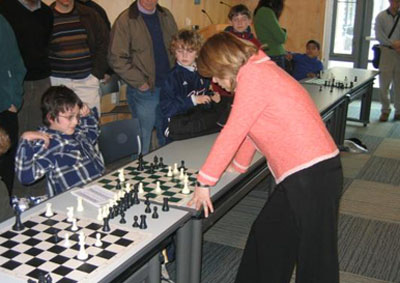 When the game was over, nicelly Susan accepted to this picture with the victorious Pasha.

RR. Thanks to Galina, proud mother of Pasha for providing the pictures
Thanks also to Susan Conlon for her great shots.

The powerful team of TAG chess students participated at the World Amateur Team 2007 tournament in February
Our representatives Kevin, George, Brandon and Daniel were selected in base to their perfect scores in past tournaments in Princeton area. 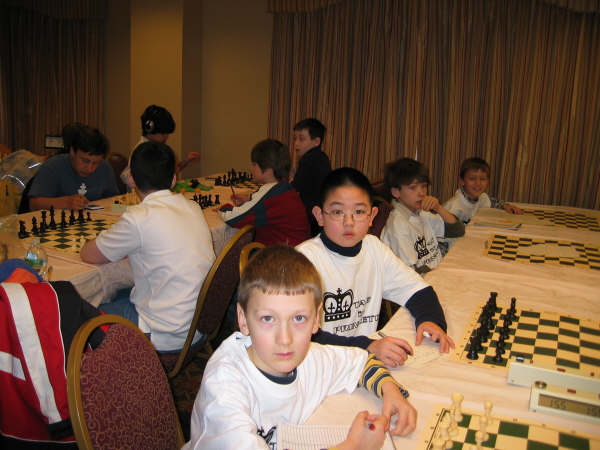 "It was the first time every member in the team of TAG
in Princeton to participate the Parsippany National
Chess Tournament on February 17-19, 2007. It was a big
challenge for kids to face adults especially Kevin. He
has to play with the best opponent in the team. Every
one has learned how to deal with the situations not
only technically, but physically and emotionally.
Kevin now is much more motivated in playing chess than
before. It was a great experience for the kids."
Hui Li (Kevin's Mom) 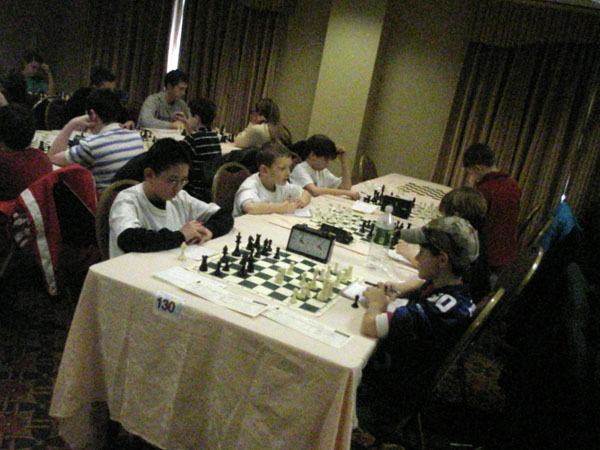 To this team...we made them sweat!

"This was a wonderful experience for kids and also for parents. Daniel still
talks about it."
Annie Lyubchenko (Daniel's Mom) 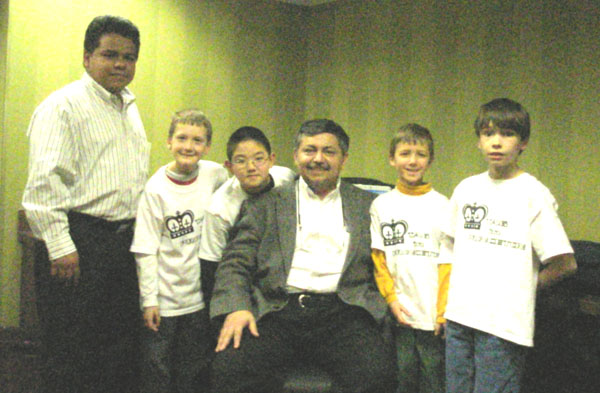 So here we are. Happy after our not bad performance and ready for the next event!